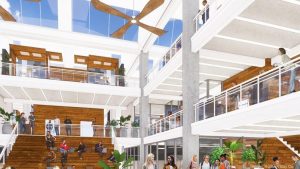 Plans have been made to redevelop the Lord & Taylor department store at the King of Prussia Mall into office space.

The two-story, 119,345-square-foot space will be rebranded as York Factory, a reference to a settlement in Canada that was also the site of a historical Hudson Bay factory. The King of Prussia store hasn’t closed yet but is scheduled to by the end of February. Though Lord & Taylor brand sold to Le Tote in 2019, it held onto its real estate assets with its space at King of Prussia being one of those locations. The mall is the largest in the nation by retail square footage.

Though already in early stages of planning, the conversion of vacant retail space at malls into other uses has gained traction during the pandemic. Mall owners are looking at ways to reposition these retail meccas that are increasingly suffering from store closures and bankruptcies, which are creating vacant space that aren’t easily backfilled with other retailers.

Mall landlords want to transition their malls into mixed-use properties to revive them and keep them relevant. A local example of that is the Granite Run Mall, with a mix of retail and multifamily spaces.

Though no longer viable as destinations solely focused on retail, malls have other attributes that make them candidates for redevelopment. They are well located with access to major arteries and mass transit, have an abundance of parking and built-in amenities with their stores, dining and entertainment.

A property group has reportedly been in talks to lease some of its vacant department store space to Amazon.com as fulfillment centers. The company has also been exploring developing an area at the King of Prussia Mall where J. C. Penney Co. Inc. once had a department store into apartments, hotel and office space.  At the Oxford Valley Mall, the group put up for sale 20 acres of the 135-acre property for the development of upwards of 600 apartments. As planned, the project would involve razing all or a portion of a former Boscov’s department store.

A year ago, a Philadelphia real estate company, bought a vacant Macy’s at the Neshaminy Mall in Bensalem and has several different plans under consideration for the 273,000-square-foot property.

The redevelopment of the former Lord & Taylor at 180 N. Gulph Road in King of Prussia had initially been eyed as coworking space targeting office and medical users. The pandemic altered that plan and it has now evolved into traditional office space that is being marketed to a range of tenants, according to a person familiar with the matter. Redevelopment of the building in King of Prussia will begin once a certain amount of leasing has been secured. A marketing brochure for York Factory at King of Prussia describes the revamped space as “turnkey designs” that are “built to maximize productivity, empowering employees to choose how and where they work best.”

Plans call for adding windows to what is now a solid, windowless box as will a central atrium, grand staircase and a rooftop lounge area. A series of amenities will also be incorporated into the space that range from weekly events along with a gym and yoga studio to concierge services and the potential to include full-time licensed child care programs. Rents for the space would be around $30 a square foot.